The Resource Center page is divided into two main sections. The Team Member and Projects lists on the left side of the Resource Center page give you a comprehensive overview of all team members (including roles) currently assigned to the project. You also have access to filters to help you quickly find the resources you’re looking for—by project, team member, role, or skill. 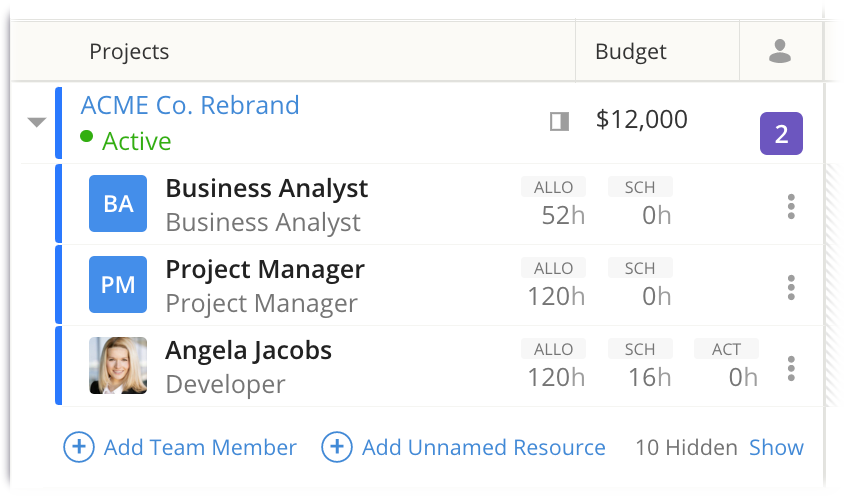 The filters and functionality of this list change depending on whether you've selected the Team Members tab or the Projects tab.

When the Team Members tab is selected, you'll see a list of team members; each member can be individually expanded to see the projects to which they’re assigned, any time off they have scheduled, and their allocated, scheduled, and actual hours for the project.

In the Team Members tab, you can drill down further to see the following task information:

You can also perform actions at the task level, such as distributing or reassigning a resource's scheduled hours.

When the Projects tab is selected, you'll see a list of unarchived projects that can be expanded to show the individual team members and unnamed resources which are assigned to them.

The Team Member and Projects lists are comprised of both named and unnamed resources.

In the Team Member and Projects lists, you can view the Allocated, Scheduled, and Actual hours for each resource of each project. These hours represent staffing expectations from three different perspectives.

Resource Center
Ready to report an in-app issue? Submit a ticket
Thank you for your feedback!

Sarah Bridges
Join us at Kantata!